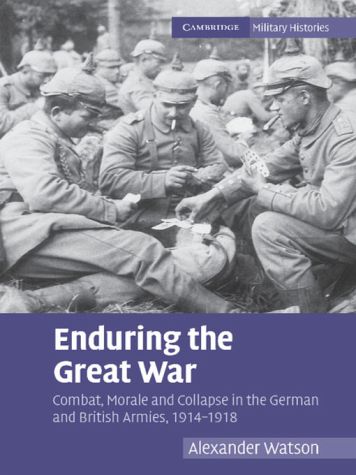 Entstanden nach der Auswertung von Dokumenten des DTA: „This book is an innovative comparative history of how German and British soldiers endured the horror of the First World War. Unlike existing literature, which emphasises the strength of societies or military institutions, this study argues that at the heart of armies‘ robustness lay natural human resilience. Drawing widely on contemporary letters and diaries of British and German soldiers, psychiatric reports and official documentation, and interpreting these sources with modern psychological research, this unique account provides fresh insights into the soldiers‘ fears, motivations and coping mechanisms. It explains why the British outlasted their opponents by examining and comparing the motives for fighting, the effectiveness with which armies and societies supported men and the combatants‘ morale throughout the conflict on both sides. Finally it challenges the consensus on the war’s end, arguing that not a ‚covert strike‘ but rather an ‚ordered surrender‘ led by junior officers brought about Germany’s defeat in 1918.“
Beschreibung des Verlags  Cambridge University Press